A Norway-Class starship with extensive weapons and shields upgrades.

The Neptune saw its shakedown cruise right in the heat of the Dominion war. The ship participated in the second battle of Vulcan, the Battle of Deep Space 9, and numerous other minor battles during the course of the war. Later the ship was commisioned as a pirate hunter and saw activities in Klingon space, the Romulan border, and into Orion space.

During the Empire War the ship saw more action than any other in Starfleet and as such was the most decorated vessel in the Empire War and was responsible for the capture of the Jedi menace Dey’ron who coincidentally was sentenced to Denchar.

Currently the ship is assigned to the Denchar system.

Captain Brass has been captain since the ship’s first mission. 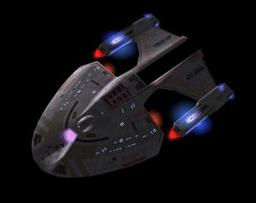