This type of shuttlecraft had two engine nacelles attached to the dorsal sides of the main body of the shuttlecraft and stub wings positioned below the center line. There was a small impulse drive located in the center of the aft bulkhead, just above the center line.
The cockpit had three forward facing windows arranged vertically, with the center window divided into three triangular segments. There were also a single window on the roof of the craft and two angled windows on each side. There was also three windows in the center of the craft in the central compartment that could be used in an emergency evacuation.

This shuttle type also had four retractable landing gear located at each corner of the ventral hull.

This layout had four rows of 8 seats facing each other running the length of the shuttle, forming two aisles. This configuration allowed equipment to be stored between the two center rows of seats. The aft bulkhead had two displays centered on the aisles and several compartments. 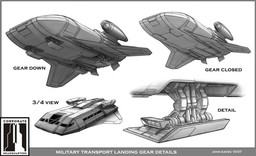