A common item among Starfleet personel, the injectable translator overcomes many of the drawbacks of the standard universal translator by allowing the user to appear to be a native speaker of the language. The translator is injected directly into the vocal cords and translates the character’s words (as well as amplifies the translation) as the character subvocalize his normal speech.

Use of this device requires a Routine Espionage (Covert Communications) skill test.

A second component of this device is injected into the inner ear and translates all that the character hears.

Most versions of this device also contain a miniature transponder with a range equivalent to a commbadge for keeping a transporter lock on the user. (Note: This tranciever does not allow personal communication) The Device has an internal memory and can store several languages. Complexity of the language determines the numbers. Otherwise it uses the transponder to work with the ship’s universal translator. 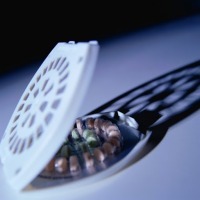