This ship has an interesting history. According to its logs, the ship was commissioned during the early part of the Dominion War. Assigned to the 582nd Dal’elk “Rhomal Gal’galeshar” (Starry Eagles). She saw action in the Kalandra Sector as well as at the second battle of Deep Space Nine. Later the vessel saw much action during the Empire War but was decomissioned in 2385 and sold to Captain Anaxo Maxeen.

The ship was lost in a crash on Denchar and abandoned only to be recovered by the crew of the Grinning Vulcan.

The crew of the Grinning Vulcan find the Fearless at the bottom of the ammonia seas of Denchar. They manage to make some repairs to the vessel and use it to escape from the penal colony.

The group arrives on Commerce 01 after escaping from Denchar. They trade in the Fearless for the Heart o’ Gold. 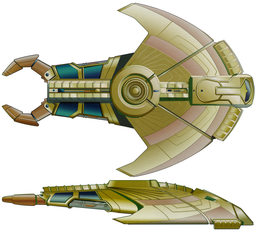