The Death Stars, the Galactic Empire’s ultimate terror weapons, were battle stations several hundred kilometers in diameter and mounting a directed energy superlaser capable of completely destroying a planet with a single shot along with 15000 lasers, ion, turbolasers batteries, and heavy turbolasers in all plus an additional 768 tractor beam emplacements. However, the first Death Star’s defenses were not tight enough to stop starfighters from penetrating them.

Splitting the station into two equal hemispheres was a huge equatorial trench approximately 503 kilometers in length for the first Death Star and 2,827 kilometers for the second Death Star. This area of the station housed most of the major landing bays, drive thrusters, sensor arrays and tractor beam systems. Halfway between the equator and each pole were two supplementary trenches. The Death Star was divided into 24 zones, 12 per hemisphere, each controlled by a “bridge”. To further organize the immense amount of activity aboard, there were specific “sectors” denoting function. These included the General, Command, Military, Security, Service, and Technical sectors.

A drydock on one of the Death Stars Since service onboard the Death Star was a long-term affair, the station maintained a number of civilian amenities to make the time aboard a deep space station more comfortable. Parks, shopping centers, recreation areas, and taverns such as the Hard Heart Cantina could be found in the general sectors of the station.

Facilitating the Death Star’s realspace propulsion were a network of powerful ion engines that transformed reactor power into needed thrust. In order for the Death Star to be a deadly threat, it needed to be mobile. Using linked banks of 123 hyperdrive field generators tied into a single navigational matrix, the Death Star could travel across the Galaxy at superluminal velocities. The incredible energies harnessed by the station combined with its great mass gave the Death Star magnetic and artificial gravitational fields equal to those found on orbital bodies many times greater in size.

The Death Star’s superlaser derived power directly from the hypermatter reactor. Its faceted amplification crystal combined the destructive power of eight separate tributary beams into one single blast with the intensity of a stellar core. After firing a blast, though, the Imperial engineers had to recharge the reactor, which took at least 24 standard hours. Though the energy output of this blast could be scaled to fire at smaller targets such as capital ships, as was the case during the Rebel assault on the second Death Star, the two major instances in which the superlaser was fired were at full power at planetary bodies. 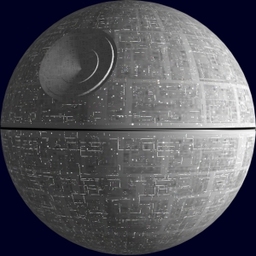