A peculiar combination of modern and ancient technologies, the bowcaster is the traditional weapon of Wookiees. While rather old-fashioned to those accustomed to using blasters, a bowcaster is quite deadly in the hands of a skilled Wookiee warrior.

The bowcaster is essentially a magnetic accelerator with twin polarizers that use alternating polarity pulses to accelerate an exceedingly tight metal bowstring which propels an explosive quarrel at extremely high speed. The fired quarrel has the appearance of an enlarged blaster bolt because it is wrapped in an energy envelope that channels the quarrel’s explosive force into the target. The result is a weapon that’s considerably less advanced than a blaster pistol yet delivers an equivalent amount of damage. Tremendous strength is needed to cock the weapon, which notches the bowstring and loads a quarrel from the ammo cartridge. This primitive arming system limits the bowcaster’s rate of fire and requires a great amount of patience and precision on the Wookiee’s part, since it may take several seconds for the warrior to get off another shot. Some Wookiee’s have modified their bowcaster’s by adding multiple bowstrings, twin bows, or an automatic recocking system. During the Imperial control of Kashyyyk Wookiees often bolted blaster rifles to their bowcaster’s for extra firepower.

Bowcasters are designed for use in Kashyyyk’s dense jungles, with good stopping power (for taking out the most dangerous predators) but are short-range weapons with a maximum range of only fifty meters (165 Feet). The weapon can be disassembled and carried in a utility pouch; and can be reassembled in less than a minute. Wookiees use bandoliers to carry power packs, canisters of blaster gas, and spare ammunition cartridges that hold six quarrels each.

A bowcaster can be fired manually by moving the reserve spring into position and fashioning a bowstring from a meter-long length of kthysh vine (many warriors carry a treated kthysh vine in their utility pouches for emergencies.) Used in this fashion, the bowcaster’s range is cut to thirty meters (98 feet), but it can fire standard explosive quarrels or simple crossbow bolts carved from wood.

Hand-built by the master weapon crafters of Kashyyyk, bowcaster’s are bestowed upon young Wookiees as they are completing adulthood rites of passage. This tradition has endured for thousands of years, and a warrior’s bowcaster is considered a visible symbol of his or her courage and honor. These highly-prized possessions are often engraved with clan markings and pictographs depicting a warrior’s greatest accomplishments. 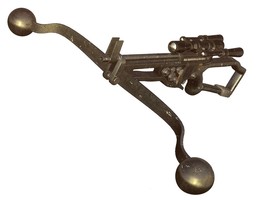