Alyr started out as a professional duelist and a con artist in the Beta Quadrant, confining his actions primarily in Orion-controlled space outside the jurisdiction of Starfleet. He eventually got caught up in the pornographic industry, where he shortly rose to a prominent position; his primary co-star during this time was Galaxina, also a star in Orion pornography at the time. He has since left that industry and has taken purchased a bar on Nimbus, where he spends most of his time regaling his customers of his earlier exploits, both of the carnal and visceral kind.

Brunell, once a sexbot owned by a prominent member of the Orion Syndicate, currently serves as Alyr’s bouncer. 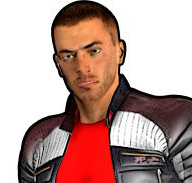