Galaxina was Alyr’s favorite starlet to work with. Their on screen chemistry was epic and are considered some of the best human-human-male-female scenes ever filmed.

They lived together for several months but were never exclusive. She came from a rich and influential family and had very powerful contacts. She would pimp Alyr out to rich women from time to time to make extra money.

She always remained in contact with Alyr and often wonders what has become of him.

Alyr introduced the group to the lovely Galaxina when they arrived on Deep Space 9. She has proven to be a generous and charming hostess.

Alyr recieved video evidence of Galixina’s torture and death. Apparenlty the Syndicate is hunting down anyone associated with Alyr. What is even more troubling is that Galixina was holding alot of money for Alyr and that money is assumed to have been lost. 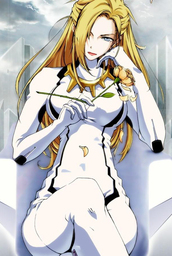