Starbase Deep Space K-7 is a Starfleet station orbiting Sherman’s Planet in the Sherman System, Aldebaran Sector. The base is an important hub for Starfleet’s operations near the Klingon Empire and is notorious for its history with tribbles. Deep Space K-7’s functionality and make-up are comparable to the Klingon Ganalda Space Station.

In the 2260s, Deep Space K-7, or ‘Deep Space Station K-7’, was a civilian-owned Federation space station located 3.26 lightyears from the Klingon border. It became the site of storage for quadrotriticale destined for the colonization of nearby Sherman’s Planet. In 2267, this fact also caused a temporary tribble infestation on the station.

Although Deep Space K-7 became outdated and had fallen into disrepair, it still played an important political role when peace talks between the Klingon Empire, Gorn and Nausicaans were held here in 2391. However, the talks were unsuccessful and only lasted for two days until an explosion and subsequent murder of a Klingon extremist (whose body was ejected into space but had snagged onto the outside of the station). By 2409, Deep Space K-7 was moved in an orbit around Sherman’s Planet and Naomi Wildman had become the station’s new commander. It is, however, still severely outdated and dangerously close to the border with the Klingons. 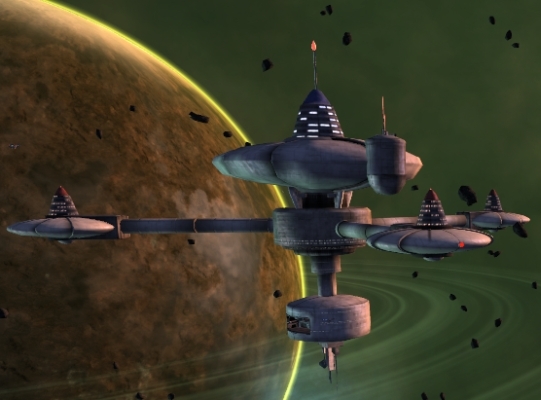