To say she is crazy is an understatement. While serving as a Commander in Starfleet she was captured by the 501st legion and suffered extreme interogation techniques. No one knows how she escaped but when she returned to Starfleet, she was deemed “Emotionally damaged beyond repair” and given a medical discharge. She retired to Risa and three months later was sentenced to Denchar for murdering a bunch of tourists.

Following her escape from Denchar Penal Colony she began a one person war against a parasitic spidelike species that takes over people’s brains by nesting in them. Of course nobody believes her because she is insane and has no proof. She claims they burst into flames when she removes them. When she finds victims of the parasite she leaps on them and drives an icepick into their forehead. This usually kills the infected person but some do survive. Her victims are many but those that survive her attack end up joining her or at least seeing her as their savior.

People that know her tend to fear her chaotic and unpredictably violent behavior.

She led the group to the ancient Orion Mining Company computer system in the deep mines. Karr gave her an Orion Disruptor and a pair of Orion Mining Goggles.

She got the crew out of the mines and went her own way. She did reappear later and attempted to stab Alyr in the head with an ice pick, claiming she was trying to kill a spider. Though she was stopped, she did return a second time and this time succeeded in stabbing Alyr in the head. When he was rushed to Cate, she and Karr discovered that there was, indeed, a spider-like entity in Alyr’s skull, which burst into flames upon exposure to the air.

We met her again, and she hasn’t really changed. Jacen trader his dream crystal in exchange for her leading the group back through the Undermaze, but the rescue of YunDarr took precedence. She does seem to have taken a liking to the group, however. Wheter this is a good thing or not remains to be seen, but things look good right now.

Eight escaped from Denchar with the party. To be truthful, without her aid, the party would not have been able to escape at all, and a collective favor is owed to her by all. She still has hew dream crystal, and appears to becoming somewhat more lucid – that, or she’s becoming precognitive. She has demonstrated uncanny insight during the escape, and should prove to be even more useful to the party in the future.

Eight left the group upon arrival on Commerce 01. Her whereabouts are no longer known.

The voices in her head directed Eight to seek out more soul crystals. “As many as she can find.” Remembering her friend Jacen had one, she begins the search for the SmileyPoints. Along the way she liberates many people infected with brain spiders.

Eight discovers that Thuku has been arrested by The Empire and is being taken to the Deathstar for interogation. Recognizing this as her chance to find Alyr and maybe get his sould crystal, she infiltrates the Deathstar and waits.

It has been some time since Eight made an appearance. After missing the team on the Deathstar, Eight stole a ship and headed towards the outer rim of the galaxy. There she encountered a parasitic insect entity that possessed powerful telepathy. Recognizing the danger she was in, she fled, hired a crew, and went back. The crew had no idea that they were on the ship of a madwoman. By the time they had realized this, she had killed half of them off and the other half were either fiercely loyal to The Terror, as they called her, or they were to scared to go against her in any way.

Eight hears about a giant bug ship being captained by a princess and gives chase. She arrives on Citadel and reunites with Karr at a fund raising ball. There she meets Matt, Thanos, R’shee, Obdulia, and Jo. After “happy talk”, she goes off to confront the “Princess Captain” but misses her by moments.

Eight tracks down the Lexx and confronts the “Princess Captain”. Realizing that the bug ship would be of no help at this time, Eight takes the crew to Drozana Station, where she “hears” something is afoot.

Eight and the crew members she trusts the most, are betrayed by Two-Su and marooned on a planet. Later they are rescued but the “Voices” tell Eight they are in danger and she starts shooting people. When she awakens she feels confused.

In a rare moment of lucidity, Eight must confront her own inner demons.

Captured, Eight and her crew are forced to allow a search of their ship. Eight unleashes her “Crazy” on the commander of the enemy ship and then escapes. 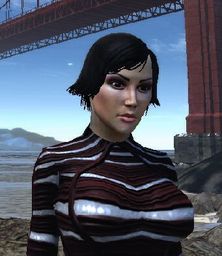