Captain of the USS Ragnarok, a deep-space reconnaissance ship.

The crew learned that Captain Paupaub has been placed in command of Operation JET while Admiral Yore recovers from the injuries he suffered during the attack on the USS Iriquois. Karr looks forward to meeting his old rival in combat. 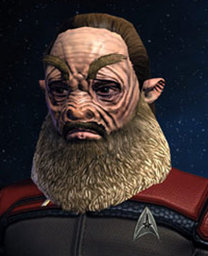